*All items pictured are from my personal collection unless otherwise noted.

Rory Storm (7 January 1938 – 28 September 1972) was an English musician and vocalist. Born Alan Caldwell in Liverpool, Storm was the singer and leader of Rory Storm and the Hurricanes, a Liverpudlian band who were contemporaries of the Beatles in the late 1950s and early 1960s. Ringo Starr was the drummer for the Hurricanes before joining the Beatles in August 1962, replacing original drummer Pete Best.

The Hurricanes were one of the most popular acts on the Liverpool and Hamburg club scenes during their existence, although their attempt at a recording career was not successful. They released only two singles (and one additional compilation track) during their early 1960s heyday, and none of their material made the charts. Their second and final single was a version of the West Side Story song “America“, and was produced by the Beatles’ manager Brian Epstein.

When Storm’s father died, he returned from Amsterdam to Liverpool to be with his mother at Stormsville, at 54 Broadgreen Road, Broadgreen, Liverpool. On 27 September 1972, Storm developed a chest infection and could not sleep properly, so he took sleeping pills. The next day Storm and his mother were both found dead. A post mortem determined that Storm had not taken enough pills to kill himself, but it was suspected that, after finding her son’s body, his mother had.

Rory Storm was the stage name of Alan Caldwell, born 7 January 1938, in Oakhill Park Estate, Stoneycroft, Liverpool, to Ernie and Violet Caldwell. His father was a window cleaner by profession, and a part-time porter at the Broadgreen Hospital, often singing songs to patients. Storm had one sister; Iris Caldwell, who later dated George Harrison when she was 12, and Paul McCartney, when she was 17. Iris later married Shane Fenton, later known as Alvin Stardust. Apart from music, Storm was interested in sports, particularly athletics; he ran for an amateur team in Liverpool called the Pembroke Harriers, and won the Pembroke Athletics and Cycle Club steeplechase record. Instead of being driven home after concerts in Liverpool, Storm preferred to run home.

Storm played football regularly and was a good skater and swimmer (once swimming the 12.5-mile length of Windermere). Liverpool F.C. used to train at Melwood and he went to watch them in training, later putting up a large photo of himself training with the team on his wall at home. He was the captain of Mersey Beat magazine’s football team, called the Mersey Beat XI. Storm was born with a stutter (a speech impediment), which did not affect his singing. Because of Storm’s bad stammer, his friends never allowed him to tell a joke or to order a round of drinks, as it took too long. He became a cotton salesman (as was Jim McCartney, Paul McCartney’s father) before forming a skiffle group.

Storm changed the name of his group to “Al Storm and the Hurricanes”, then “Jett Storm and the Hurricanes”, and finally to “Rory Storm and the Hurricanes”. The original line-up was Storm, Byrne, Ty Brian, Lu Walters, and Ritchie Starkey (drums). Storm and the Hurricanes entered a competition managed by Carrol Levis called “Search for Stars” at the Liverpool Empire Theatre on 11 October 1959, reaching second place ahead of 150 acts. The line-up of the Hurricanes finally solidified with Storm (vocals), Byrne (rhythm guitar), Ty (Charles) O’Brien (lead guitar), Walters (bass guitar/vocals) and Ringo Starr.The group played at the Cavern Club with the Cy Laurie Jazz Band on Sunday 2 January 1960, and a week later supported the Saints Jazz Band and Terry Lightfoot’s New Orleans Jazz Band. Playing rock ‘n’ roll music was a problem at the Cavern Club, as it was not accepted by the customers or management. When Storm and the Hurricanes performed there on 17 January 1960, with Micky Ashman’s Jazz Band and the Swinging Blue Jeans, their first song was “Cumberland Gap” (a skiffle song) by Lonnie Donegan. Then they played “Whole Lotta Shakin’ Goin On” by Jerry Lee Lewis. The jazz and skiffle audience were outraged, booed and threw copper coins at the group. The Cavern’s manager Ray McFall, fined them six shillings, but the coins collected from the stage floor were worth more than the fine.

Storm and the Hurricanes performed at the Liverpool Stadium on 3 May 1960, on the same bill as Gene Vincent. Larry Parnes became interested in the Hurricanes, and invited them to audition at the Wyvern Club as a backing group for Billy Fury. Storm turned up at the audition, but only so he could have his picture taken with Fury. In July 1960, the group secured a residency at Butlins holiday camp in Pwllheli (playing in the Rock ‘n’ Calypso Ballroom) for £25 each per week. Starr was not sure about giving up his job as an apprentice at Henry Hunt’s, where he made climbing frames for schools, until Storm put forward the idea of “Starr-time” (a solo spot) with Starr singing songs like “Boys” by the Shirelles. Starr finally agreed when Storm told him about how many women would be “available”. It was during this season that Starr (who had been known as “Ritchie” until then) changed his name to “Ringo”. 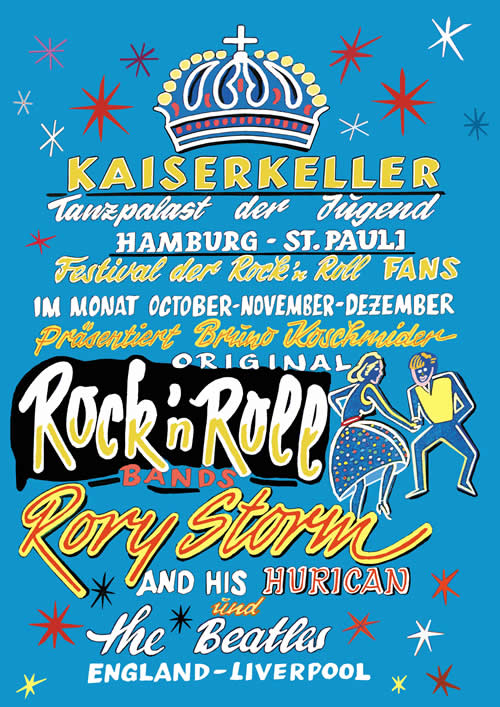 The poster announcing Storm’s appearance at the Kaiserkeller in Hamburg, (with “and his Hurican”), and “the Beatles” lower on the bill. *This image was found online.

After playing for more than 16 hours per week, the group were contacted by Allan Williams, who wanted them to go to Hamburg. Derry and the Seniors were successful there, and Williams wanted an additional group. As Storm and the group were committed to Butlins, they turned Williams’ offer down (as did Gerry and the Pacemakers) so Williams sent the Beatles to Hamburg instead. After the summer season ended in early October 1960, Storm and the Hurricanes were free to travel to Hamburg, replacing Derry and the Seniors at the Kaiserkeller. They arrived in Hamburg on 1 October 1960, having negotiated to be paid more than the Seniors or the Beatles. They played five or six 90-minute sets every day alternating with The Beatles. Storm and The Hurricanes were later presented with a special certificate by Bruno Koschmider (the owner of the Kaiserkeller) for their performances.

The stage of the Kaiserkeller was made of planks of wood balanced on the top of beer crates, so the two groups made a bet to see to who would be the first to break it. After punishing the stage for days, a slight crack appeared, and when Storm jumped off the top of the upright piano, during a performance of “Blue Suede Shoes“, it finally broke. Byrne remembered that as Storm hit the stage, it cracked loudly and formed a V-shape around Storm. He disappeared into it, and all the amplifiers and Starr’s cymbals slid into the hole. Koschmider was furious, and had to replace the live music with a juke box. Both groups went across the road to Harold’s cafe for breakfast, but were followed by Koschmider’s doormen with coshes, who beat the musicians as punishment.

During their eight-week residency Williams arranged a recording session at the Akoustik Studio, which was a small booth on the fifth floor of 57 Kirchenalle (the Klockmann-House) on Saturday 18 October 1960. Williams asked Lennon, McCartney, and Harrison from the Beatles to play and sing harmonies for Walters (of the Hurricanes) on the recording. Pete Best (the Beatles’ regular drummer at the time) was in town buying drumsticks, so Starr played drums, which was the first time Lennon, McCartney, Harrison and Starr recorded together. They recorded three songs: “Fever“, “September Song” and “Summertime“.

Storm and the Hurricanes were the headlining group at the first “Beat Night”, in the Orrell Park Ballroom, in March 1961. They were also invited for a season at the Butlins camp in Skegness in Lincolnshire. Sam Leach (a Liverpool promoter) arranged a series of dance nights at the Palais Ballroom in Aldershot, starting on 9 December 1961. The first Saturday featured The Beatles, but as the local newspaper forgot to run the advertisement only 18 people turned up. The second Saturday was arranged for Rory Storm and the Hurricanes to perform, and as it was advertised this time, 210 people paid to get in. Leach’s idea was to attract London agents to watch the series of concerts, but when he realised they would never travel out of London he abandoned the idea.

Starr considered leaving Storm at that time to join Derry and the Seniors, but accepted a job with Tony Sheridan at the Top Ten Club on 30 December 1961, as Sheridan’s offer of more money, a flat and a car was too good to refuse. Starr’s stay with Sheridan was short-lived, as he found Sheridan’s habit of changing the set list without telling his backing group beforehand frustrating, so he rejoined the Hurricanes. On 5 February 1962, Best fell ill and the Beatles had to play a lunchtime concert at the Cavern and an evening concert at the Kingsway club in Southport. As the Hurricanes had no concert that day Starr played with them live on stage for the first time, although he had recorded with them in Hamburg.

During a Hurricanes’ residency at Butlins, Lennon and McCartney drove from Liverpool to Skegness, on 15 August 1962, to ask Starr to join the Beatles. Shortly before, Starr had agreed to join Kingsize Taylor in Hamburg, as Taylor was offering £20 a week, but Lennon and McCartney offered £25 a week, which Starr accepted. Lennon and McCartney offered Storm to swap drummers (with Best replacing Starr) but Best rejected the idea. According to Epstein in his autobiography, Storm was, “One of the liveliest and most likeable young men on the scene … was very annoyed when Ringo left and he complained to me. I apologised, and Rory, with immense good humour said, ‘Okay. Forget it. The best of luck to the lot of you'”. The Hurricanes then became known for having a succession of drummers, including Gibson Kemp, Brian Johnson, John Morrison, Keef Hartley (August 1963), Ian Broad and Trevor Morais, who all stayed with the group for a short period before leaving.

Despite Starr joining the Beatles, both groups would perform on the same bill during 1961, and at many concerts thereafter. In 1962, both groups performed together at St Patrick‘s Night Rock Gala (Knotty Ash Village Hall) Queen’s Hall (Widnes) and with Little Richard at the Tower Ballroom. In 1963, Storm and the Hurricanes were filmed as part of the “Beat City” documentary, which was broadcast by Associated-Rediffusion Television.

Above info is from Wikipedia. 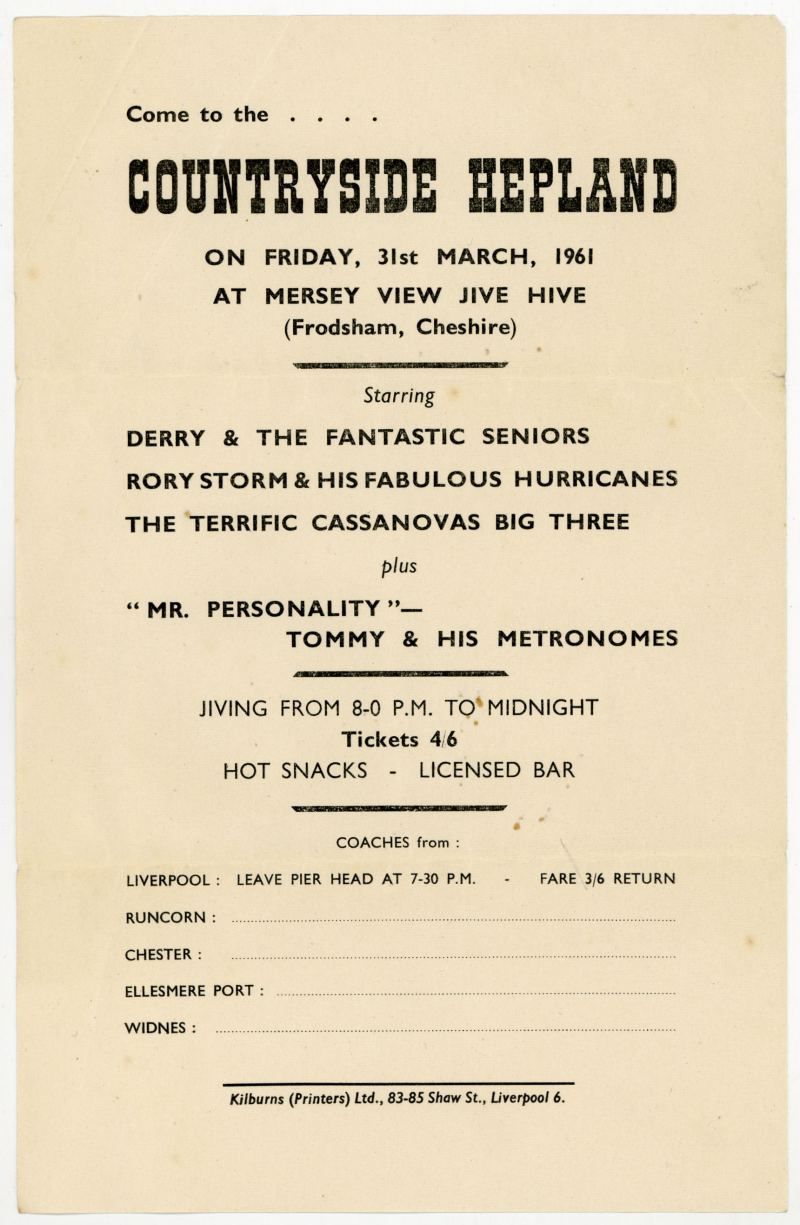 *The following handbills shown below are not mine. 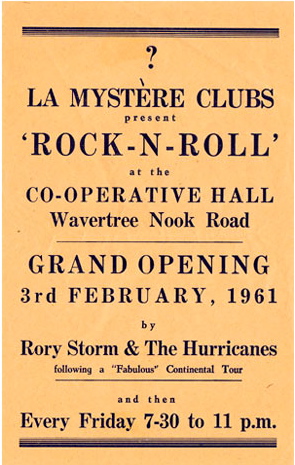 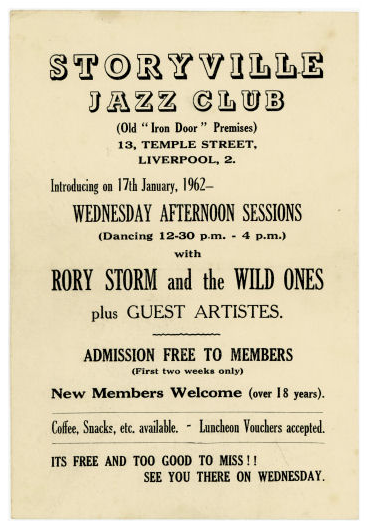 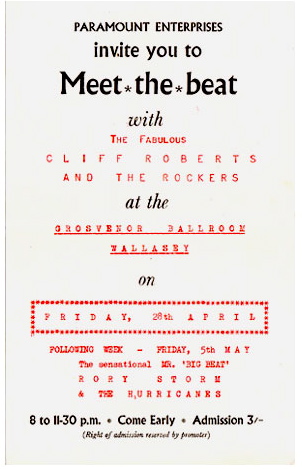 *This poster can be seen in the upper right hand corner of this photo right where his cigarette is pointing. From his “Photograph” book. 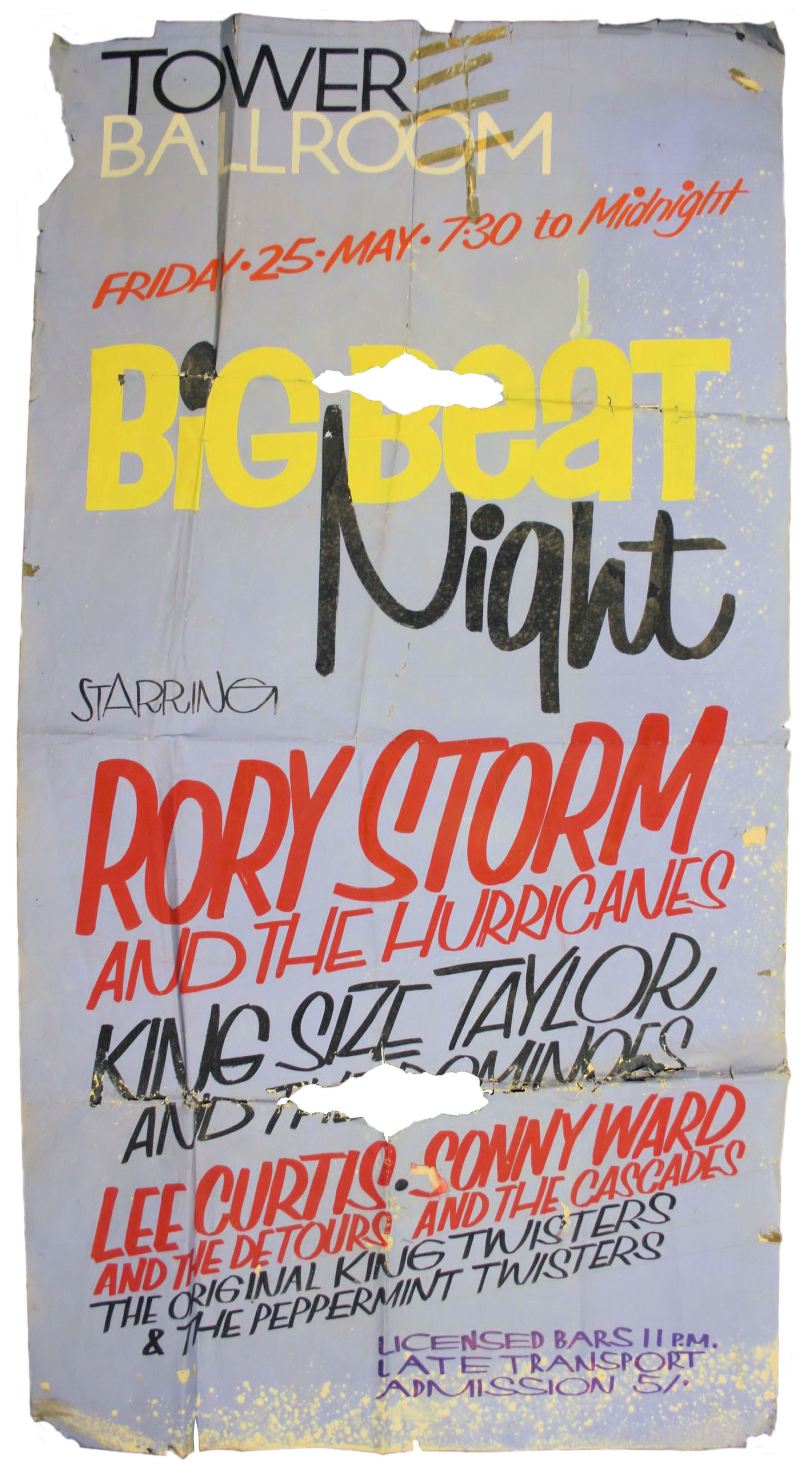 *The posters below from Tracks UK. http://www.tracks.co.uk/